Travel icons vs. local gems: the gloves are off

PR-driven buzzwords like "staycation" may be irritating, but there's no denying that the trend for flight-free UK holidays is here to stay. Whether you're holidaying close to home through penury, environmental concerns, or sincere appreciation of this sceptered isle, here's how three less-known UK attractions measure up to Europe's iconic destinations... 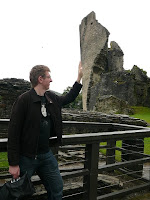 1. Leaning tower of Pisa vs. Leaning tower of Caerphilly
Tuscany exudes a powerful charm, and Pisa's architectural oddity has become a staple of tourist photos. But why battle the amateur snappers, all crowding to get that perfect picture of themselves holding up the leaning tower? You can get the same smugshot (modelled on the left by my long-suffering travel companion, Normal Matt) at the stunning castle in Caerphilly, Wales, which has a gravity-defying south tower. Instead of weaving through crowds, you'll share the castle's enormous grounds with a handful of tourists, and the shop across the moat sells delicious local cheese for a turret-side picnic. A victory for the Valleys. 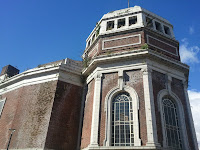 2. Alhambra Palace, Grenada vs. Alhambra Palace, Bradford
It would take colossal artistic licence to compare the grand Moorish palace to a shabby theatre in Bradford. Nonetheless, forgoing Espana in favour of a great northern weekend definitely has its pros. Catching a show at Bradford's Alhambra is cheaper than London's west end, and the nearby curry houses famously serve Britain's best balti. (Try Omar's, proud home of the "Giant Naan" challenge.) The ghostly skeletons of some of Bradford's grander buildings, gradually being reclaimed by creeping ivy (pictured, left) make for an evocative walk around the town centre, but I think even the most hedonistic weekend doesn't compare to tales of sultans and lovers: ole.

3. The London Eye vs. The Manchester Wheel
Even those who love London ardently, as I do, wince at the prices. A skylark's view of the capital weighs in at a painful £18.60 if you don't book ahead, but spending that at Manchester's giant ferris wheel will get you close to three tickets.

And there's none of that branding nonsense: it's not an "Eye", it's not "EDF-sponsored" -- it's "The Wheel", plain and simple. It may have a no-frills moniker, but The Wheel boasts soaring views of Manchester's cathedral and shopping district, and you'll be able to afford a few pints afterwards. Sinclair's Oyster Bar is in nearby Cathedral Gardens for cheap ales: this rustic boozer has outdoor seating cosy enough to eavesdrop on the locals under the late-summer sun. A definite win for our friends up north.