Picture the scene: your feet, already in holiday sandals, are nearly frozen by the plane's air-conditioning and your skin is scented with factor 35. You have a busy trip ahead of you, all the major landmarks, every cafe recommended by Lonely Planet, and some well-deserved R&R on the beach. When the plane hits the tarmac, and you step out onto the runway into the blissfully warm air, your heart leaps because you've finally arrived!

Or have you? A quick scan of the airport reveals a shuttle bus that takes you to the city centre, but what's this? A 90-minute journey? There's nothing quite like a lengthy roadtrip in an overcrowded coach to ruin the exciting momentum of a holiday, or chip away precious hours from a mini-break. You blame yourself for trusting that budget airline with its nonchalant parentheses: Paris (Beauvais), Barcelona (Girona)... or rather, Your Destination (Somewhere Hundreds of Miles Away).
One of Ryanair's most irritating features (for the uninitiated) is that it takes you to a smaller airport often quite far from your intended destination. It's not Paris, but nearly-Paris. (Like ordering a steak in a restaurant and having the waiter point out a field of cows, advising that "it's nearly-steak".) After more than an hour on a sweaty coach, having coughed up another ten euro for the privilege, and you might start wondering how great a saving you actually made with those low, low flight prices.
There's one simple solution to "Ryanair Regret", and that is, don't get on that coach. Bid goodbye to the rest of the rabble from your flight, as they crowd towards the shuttle bus to Milan, the crown jewel of Italian chic. You, my friend, are not rushing onwards to the overpriced, fashion-forward cultural mecca, but remaining in the smaller medieval town of Bergamo, where Ryanair so gracelessly left you. Bergamo, nestled in the foothills of the Alps, with a beautiful old town and a ruined castle, is a gem of the Lombardy region. Overlooking it for its more snobbish neighbour would be a great shame. 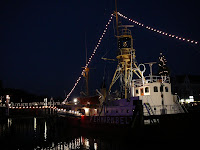 One of my happiest discoveries was through a Ryanair flight to "Hamburg (Lubeck)". I had booked this with the intention of seeing Hamburg's beautiful main square, Christmas markets (and, by sobering contrast, the terribly sad rose garden memorial for children who died in medical experiments during World War II). I made it to Hamburg, but only after a lengthy detour in stunning Lubeck, famous for its city walls, waterside views, marzipan and mulled wine. Years later, Lubeck has opened up as an international tourist destination, presumably with tonnes of marzipan hearts being created for the influx of visitors.
Love it or hate it, Ryanair has done some interesting things for travel. It has prompted hundreds of budget-conscious holidaymakers to pore over the Ryanair destinations map and say, "Fancy Szczecin, dear?" or "How about having the stag-do in Bydgoszcz?" Michael O'Leary may not be an ambassador for tourism off the beaten track, but his out-of-the-way airports have certainly broadend my horizons.
Labels: ryanair travel germany lubeck hamburg italy milan bergamo budget