Gnome and Away: the fairy folk of Iceland

“Nearly all Icelanders believe in the hidden folk,” teased our tour guide, driving us smoothly around the Golden Circle’s geysirs and waterfalls. Wandering through Iceland’s martian landscape (the land of fire and ice, symbolised by the country’s flag), I almost want to believe in them myself. But despite surveys confirming the belief prevails, I’m straining to imagine that it’s widespread among glacially intellectual Icelanders. It’s like discovering that a sardonic friend believes sincerely in the power of crystals: you wonder if the joke is on you, some higher irony you haven’t grasped. 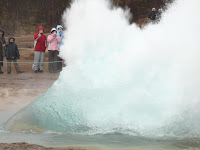 Since Iceland’s economic meltdown, more travellers have been tempted to test whether the stratospheric prices still exist, but bad press from volcanic ash clouds and failing banks have deterred many. The draw of Iceland’s natural wonders will bring the tourists back, and the rich folklore itself – Icelandic School of Elves, anyone? – will ensure a steady stream of curious visitors. The isolation is enticing too, as the sparse population and empty acres of land give an otherworldly feeling to the countryside. And being at the cutting-edge of technology and communications hasn’t eroded Iceland’s connection to the old Icelandic sagas, still read by schoolchildren today. The ancient and the modern, the internet and the elves, all cohabit happily on the island.

Certainly, if there’s any place you can imagine dotted with elves, it’s surely Iceland, with its waterfalls, stunning rocky outcrops and spitting hot pools. But I have to wonder where the fairy folk are hiding, in a landscape devoid of forest shelter. (Riffing on Iceland’s alcoholic nightlife and the bare horizons, our guide jokes: How do you get out of an Icelandic forest? Put down the vodka and stand up.) It seems hidden folk are only revealed to the knowledgeable eye: the lichen spatters on the rocks are the dashed brains of a fallen elven hero, we are told. The coast shelters shoals of mermen. And the rocks themselves must not be moved, for fear of offending a hidden stranger underneath.

“Iceland receives packages every year from tourists returning the rocks they took as souvenirs,” the guide warns. “Nothing but bad luck comes from disturbing the rocks of the hidden folk.” And this delightful disincentive seems to work: the members of our group eyeing the parched volcanic rock fragments pocket nothing. Perhaps generations of Icelandic children have been similarly deterred, and what could be a more colourful way to encourage preservation of the natural environment? For Iceland’s untouched geological wonders, perhaps we should thank the vengeful gnomes.